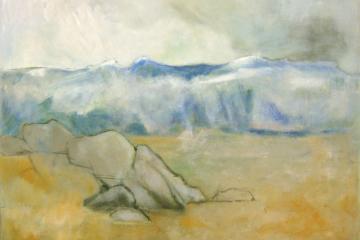 Please click on the artwork to view gallery of Thelma Hulbert's work.

Thelma Hulbert was born in Bath, Somerset in 1913. She studied at Bath School of Art before moving to London in the early 1930s. She became part of the influential Euston Road School of painters (founded in 1937) alongside Victor Pasmore, William Coldstream and Claude Rogers.

After the war Thelma Hulbert taught at Camden School for Girls and found a studio in Holland Park from which to paint. She continued her teaching at Central School of Arts and Crafts until retirement, shortly followed by a move to Honiton in 1984. Living alone in Elmfield House, Honiton she continued to draw and paint until her death in February 1995.

Throughout her life, the subjects of her paintings were still life, domestic interiors, and landscapes, many of which included the Cornish coast. During her lifetime, Thelma Hulbert was represented in twenty three exhibitions, eight of which were solo shows. The most prestigious of her exhibitions was her one-woman show at the Whitechapel Art Gallery in London in 1962.

Examples of her work are to be found in both public and private art collections worldwide and she has been featured on radio and television. Following her death, the Tate Gallery acquired two of Thelma Hulbert’s works for their collection and featured her in the Tate Women Artists book by Alicia Foster (now for sale in the THG Shop).

THG hosts a changing exhibition of Thelma Hulbert's artworks from our permanent collection in the Thelma Hulbert Room at the gallery. If you would like to know more about Thelma or if you own an artwork we may not know about, please get in contact with us, we would love to hear from you : info@thelmahulbert.com / 01404 45006